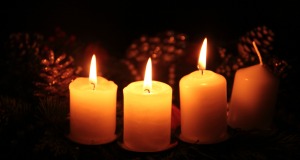 “But you, Bethlehem Ephrathah, though you are small among the clans of Judah, out of you will come for me one who will be ruler over Israel, whose origins are from of old, from ancient times.”

3 Therefore Israel will be abandoned until the time when she who is in labor bears a son, and the rest of his brothers return to join the Israelites.

4 He will stand and shepherd his flock in the strength of the Lord, in the majesty of the name of the Lord his God. And they will live securely, for then his greatness will reach to the ends of the earth.

We sing about the “Little town of Bethlehem”: an inconsequential village on the outskirts of Jerusalem. Noteworthy for being King David’s ancient birthplace, but that’s about it. Insignificant. Like so much around Jesus’ birth. Born to impoverished peasants who become refugees. Tucked in a feeding trough for smelly barn animals. Attended to only by scruffy shepherds from the margins of society and some foreign guests who can’t leave town fast enough. This is how our King puts His royalty on display. This is His glorious arrival.

And by so doing, He reminds us what kind of King He really is. One who draws close to the broken, the poor, and the marginalized. The sort of King who identifies with those most easily overlooked and cast aside. A different kind of King. And yes, the kind of King our world needs most. One who shows what real greatness really is.

Consider the humility of Jesus’ coming and His Kingship. What do you think Jesus expects from us– who seek to be like our King?

If you were the King of Everything, what would you think your life would be like? How does that compare with the way Jesus came and lived?

Posted by rgotthardt on December 9, 2014 in Uncategorized